Tango, Evita, beef, soccer… make you think immediately of Buenos Aires, the capital city of Argentina, but there is much more to it than that!!!
A world-class Opera House, open-air markets and fairs, hectic night life, street cafes, friendly people, historical and strikingly modern buildings, French-style avenues and parks, trendy neighborhoods, 19th and early 20th century buildings refurbished into ultra-new establishments and shopping centers, street crafts, an intense artistic and cultural life… just some examples of what’s waiting for you at this cosmopolitan and bohemian city.
Buenos Aires is one of the largest cities in the world. It covers an area of 77.20 sq. miles, (200 km2), twice that of Paris. More than 11 million people live in its metropolitan area, and its surroundings. It’s a city with plenty of traditions and historic spots, yet it manages to include a dynamic, urban atmosphere that accounts for its unique style. 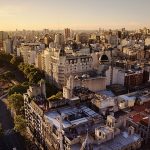